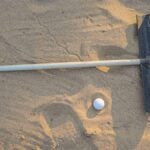 There is more to being in the basement than just getting shot.

Welcome to Stuff Golfers Should Know, the GOLF.com series in which we reveal all kinds of useful (and life!) golf wisdom that’s sure to make you the smartest, smartest, and most prepared player in the quads.

How is your sand game? not for you Bullet making skills But the technique and intelligence it displays before and after the club’s swing. If you are like many golfers, you are prone to making bad course mistakes or disrespecting other golfers. or a combination of the two.

Here’s a look at five common repository errors and how to avoid making them.

1. Entry from the top side

Getting in and out of the sand isn’t meant to be a mountaineering expedition. When you trample up and down the steep side of the basementYou’re not just making deep footprints and causing avalanches that take time to subside. You also risk damaging the grassy edges of the bunker, which is a blow to the safety of the hazard. The correct approach is to enter the cellar from the low side, following the same path inward and outward.

2. Do not bring the shovel with you

Just as you can’t shoot without a baton, you can’t create a bunker without… a rake. Before going to the ball, grab a racket and bring it with you, so you don’t have to make an extra, messy trip through the sand.

Raise your hand if you see golfers doing this. Or if you get used to it yourself: After you’ve had your shot, you slowly rush out of the bunker, pulling the spade behind you at random. Sorry, but this won’t do it. Turn around and approach the task correctly, pushing back and forth to smooth the sand as you walk backwards and cover your footprints as you go. If you’ve left a particularly deep trail or mark on the ball, turn the shovel and use the flat side to fill in the depression, then flip the cannon back to smooth out any remaining ripples.

4. Leave the rake in the wrong place

There is no set standard for where to place a rake. inside the vault? just outside of it? Halfway between them, with the head of the shovel in the sand and the handle protruding? Preferences vary from course to course, and you must stick to them. The only other rule to follow is the law of common sense: do your best to reduce the chance of a rake interfering with play. If the local base is outside or center, lay the shovel parallel to the direction of the hole on the side of the vault furthest from the playing line. If inside the bunker is the way the track likes it, leave the heater on a flat area of ​​the bunker rather than on a slope, where the ball will most likely be hung on.

Sandy footprints traced across the green are evidence of a golfer’s lack of interest. As you exit the basement, tap your shoe cleanly with the tip of the bat or wedge to remove any sand stuck to the soles. While tracking sand on the green doesn’t cause agricultural damage (in fact, since many courses deck green with the same sand they use for bunkers, it may actually be doing a lawn service), it’s not a nice aesthetic. It’s also not kind to the golfers behind you, who don’t want to have to work around the mess you left behind.

Josh Sens, a golf, food and travel writer, has been a contributor to GOLF Magazine since 2004 and now contributes across all GOLF platforms. His work has been authored in the best American sports writing. He is also the co-author, with Sami Hager, of Are We Having Any Fun Yet: The Cooking and Partying Handbook.